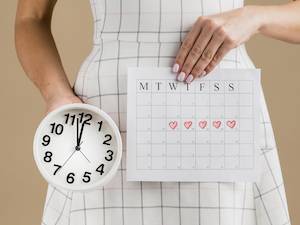 Question: What’s the best time to have sex if you want to get pregnant?

If you’re like most women, you probably answered, “When you’re ovulating….” This is sort of true – however, having sex for the several days leading up to anticipated ovulation is even better. Here’s why:

Ovulation & Fertility – Open That Narrow Window as Wide As Possible

To narrow that timing down, it’s always a good idea to track your menstrual cycle each and every time. In the old days, we told women to monitor their waking body temperature using a basal thermometer (which measures body temperature in small increments). An elevation in body temp can signal ovulation. However, these days, we say get online and download an ovulation and fertility tracking app, like Glow, which will begin predicting your most fertile windows based on the information you enter regarding your periods, temperature, and cervical conditions.

Once you have a handle on your cycle, you can begin timing sexual intercourse accordingly.

Increase Chances of Conception By Having Sex BEFORE You Ovulate

Here’s the thing: sperm can live anywhere from two to five days inside your body after you have intercourse. Your mature and freshly released egg(s) only live for about 12 to 24 hours. Thus, the more sperm in place – ready to race to the egg – the better chances you have of getting pregnant.

If you want to conceive naturally, your best bet is to track your menstrual cycle for several months so you can get a better idea of which day you will ovulate. Then, time your sexual encounters such that they occur about five days before the egg will be released and then a few times until you’re sure you’ve already ovulated.

Typically, fertility specialists will recommend that the male half of the equation only ejaculate once, every other day, during this period to increase sperm count and motility. Frequent sex means less sperm available in the semen, so having intercourse every other day – rather than as many times as you possibly can – may increase your odds.

Other things that can increase your odds of conception include:

Contact Women’s Health Associates for more information on conception and pregnancy and cultivate a relationship with a team of doctors and midwives eager to help you achieve optimal health and well-being.