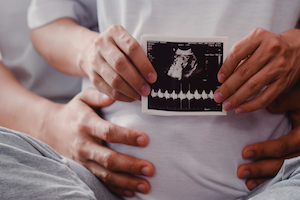 Prenatal appointments are an essential part of your pregnancy journey. Among other things, we use diagnostic tests and screenings to ensure your baby is growing and developing as s/he should. One of these screening tools is called an ultrasound.

With the mother’s permission, we use ultrasounds at just about every prenatal appointment. It allows us to view the heartbeat and watch the baby’s physical development to ensure everything progresses as it should.

Ultrasounds aren’t always used during the first prenatal exam, although they might be offered. Instead, we usually use them twice or three times throughout the pregnancy unless there’s a particular reason to do them more often.

Don’t Fall for These 7 Ultrasound Myths

What is an ultrasound?

Simply put, the U.S. National Library of science says, “A pregnancy ultrasound is an imaging test that uses sound waves to create a picture of how a baby is developing in the womb. It is also used to check the female pelvic organs during pregnancy.”

Most often, we use an ultrasound probe on the outside of the belly, but there are times where we may use a vaginal ultrasound, by gently inserting an ultrasound wand into the vagina, to get a picture of the cervix or to see the uterus and developing baby from a different angle.

Read, What to Expect During Your Routine Ultrasound (Sonogram) for more details.

Healthcare providers have used ultrasound imaging on pregnant women for more than 30 years now, and there is absolutely no evidence that they are harmful in any way. That’s why we want to eliminate the following myths, which can inhibit mothers and babies from getting the proactive healthcare they deserve.

Myth #2: Ultrasound is used to see pictures of the baby.

This is true but incomplete. Many women feel there’s no need to get an ultrasound because the prenatal pelvic exam proves the baby is growing on target and the heartbeat is healthy. Therefore, why need an ultrasound?

The thing is, ultrasounds show us more than just the baby. The patient is understandably more focused on the baby’s image, but healthcare providers use ultrasounds to look at the mother’s uterus and pelvic organs simultaneously. We may notice organ or uterus-related issues (such as a previously undiagnosed fibroid tumor) that could compromise your pregnancy or delivery if left untreated.

Therefore, the complete results of an ultrasound can take hours or a full day to come in.

Myth #4: Ultrasounds are like X-Rays and can be harmful.

This is absolutely not true. Ultrasound technology, including 3-D imaging, relies on gentle soundwaves that bounce off soft and hard tissues to create an image. There is no radiation used at all during the process. And, therefore, there are no risks associated with radiation involved for you or any bystanders.

Ultrasounds slightly elevate the pelvic/abdominal cavity temperature, but this is no more than the natural temperature fluctuations that occur when you exercise, take a warm (not hot) bath or shower.

Myth #5: You shouldn’t have 3-D ultrasounds during the first 12 weeks.

Myth #5 started because mothers noticed we don’t typically use or offer 3-D ultrasound images before 12 weeks or even later. This is not because 3-D technology is risky or more dangerous; it is because 3-D ultrasounds are not effective early on.

For the first trimester, and up until around the 20- to 25-week mark, 2-D ultrasounds tell us everything we need to know about the growing embryo. By week s25 – 32, we can use 3D imaging to look more closely at the baby’s finite features. For example, at this point, we would know if your baby has a cleft palate or lip or some other physical congenital defect, so you – and the labor and delivery team – are prepared for that.

Myth #6: You should get an ultrasound at every appointment.

There is no need. As mentioned in the beginning, most OBs use ultrasounds two or three times during the pregnancy unless there is a reason to check in more often. We schedule them strategically. That said, some patients request them more often because they like the resulting images.

If you want more than the typical two or three ultrasounds, speak to your healthcare provider. However, do know that your insurance carrier may not cover the costs.

Myth #7: 3D Ultrasounds are better at determining the gender of your baby.

You’d think this was the case, but it’s not. 3D ultrasounds are the same in terms of how they function – same wand, same sound waves, same process. The difference is the technology used to take those results and create more precise images.

Even so, determining a baby’s gender depends entirely on the baby’s position in the uterus, and some angles provide clearer information than others.

Still have questions about whether or not you should get a pregnancy ultrasound? We’re here to answer them, and we completely respect your decisions either way. Contact Women’s Health Associates to learn more.